The History of Southern View Chapel

Early in the spring of 1938, two men, Mr. Walter Winesburg and Mr. James Grove, began canvassing the neighborhood in Golden Gardens, a suburb of Springfield, with a view to organizing a Sunday school in the community. They found people were eager for such an undertaking and willing to cooperate in an organization for that purpose. In March of 1938, the directors of Southern View School gave permission to use the school building for Sunday school and other services in connection with that work. The first Sunday school services were held on March 20, 1938, with an attendance of sixty-seven persons.  Mr. Grove, as superintendent, called a meeting for the following week to select teachers for the various classes. 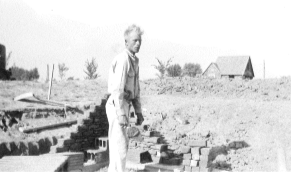 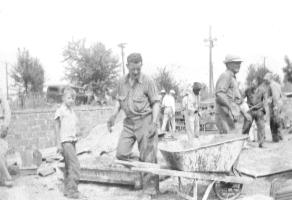 For several weeks Sunday school services were held, followed by a short talk by Mr. Winesburg.  Community interest grew to such an extent that it was thought advisable to hold evening services in addition to the Sunday morning services and a number of speakers were obtained for these evening services. Mr. Winesburg’s Sunday school class from the South Seventh Street Baptist Church (now Cherry Hills Baptist Church) had charge of one service each month during this period.

Shortly after the Sunday school was organized, plans were made to build a chapel in the community and, through the efforts of Mr. Carl Weber of the Central Baptist Church and Rev. Shontz, pastor of that church, the support of the Northern Baptist Convention (now American Baptist convention) was secured and lots were purchased on the southeast corner of Third and St. Joseph Streets from Mr. Frank Hovey. 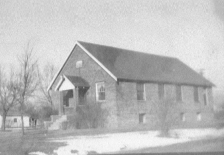 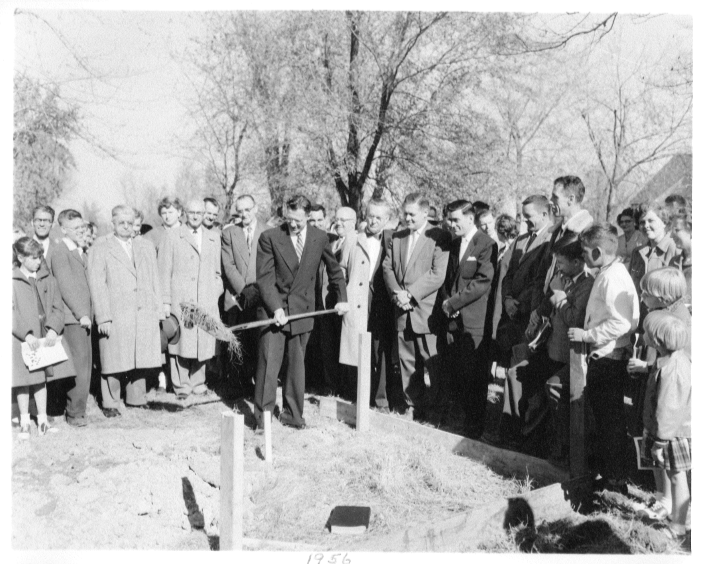 Money for the purchase of these lots was obtained from the Security Federal Savings and Loan Association. A down payment of $350 was made on the lots, which was advanced by the Security S&L, and $300 more was made available after construction work began, for a total advance loan of $650. This loan was underwritten by Mr. and Mrs. Walter Winesburg who placed a mortgage on their home for security. On August 14, 1938, Mr. Floyd Money was elected building fund treasurer and $125 was transferred from the Sunday school funds to the building fund. On August 18, 1938, Allis Chalmers loaned a tractor and operator and the Baker Manufacturing company loaned a scraper for the purpose of excavating the basement for the new building. After the work of excavating the basement was completed, preparations were made for laying the foundation. On Saturday, August 27, 1938, members of both the bricklayers’ union and hod carriers’ union donated their services and, in conjunction with the services donated by members of the community, most of the foundation was laid. The following week the foundation was completed. These services, with the work of the men and women of the community, enabled the church to be finished in record time and less than $50 was expended for labor on the entire building.

The ladies of the community set up tables on the lawn at the home of Mr. and Mrs. Minor Clark directly across the street from the chapel (3248 South Third Street – which was later bought by the church) and an outdoor dinner was served to the men working on the foundation.

The cornerstone of the new chapel was laid on September 4, 1938. The new building was occupied for the first service on December 11 of that year and it was dedicated on Sunday, January 15, 1939, with Rev. O. G. Nichols presiding. Rev. Robert Wood, pastor of Harvard Park Baptist Church, Dr. Vernon L. Shontz, Rev. R. Weber and Rev. Burd Arganbright all had a part in this service, as did Paul and Ruth Johnson and the choir from South Seventh Street Baptist Church.

The first regular business meeting was held on May 11, 1939. The first communion service was observed on Sunday, November 1, 1939. The first marriage ceremony was performed in the chapel on October 4, 1939, as the congregation witnessed the wedding of Adarene Goldsby and Lloyd Barrick. The first funeral was of Mr. Ray Irwin on November 23, 1939. A bronze nameplate in his memory was placed just north of the chapel door. In March 1946 the Chapel became an organized non-denominational church with ninety-seven charter members. On January 4, 1984, Southern View Chapel officially joined the Independent Fundamental Churches of America, an organization with which it had been involved for thirty-five years. 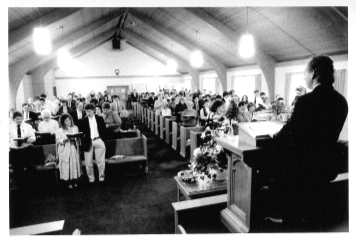 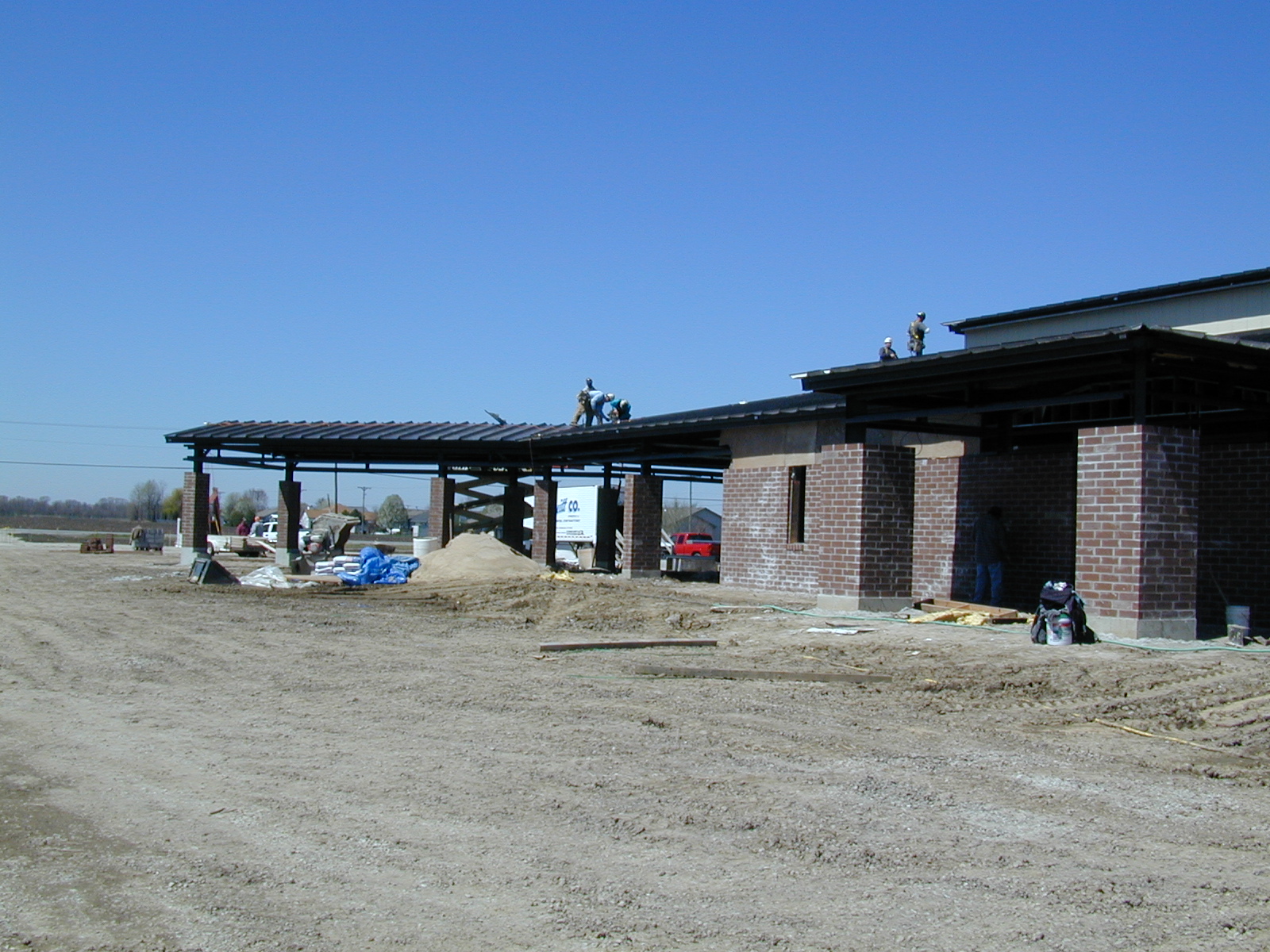 In April 1946, an old (some say Presbyterian, others say Primitive Baptist) church located on the Stout farm was given to Southern View Chapel. This old church was torn down and became the framework for the parsonage on the lot behind the church where the Hellyers lived for many years. On Sunday, August 28, 1949, the congregation witnessed the burning of the mortgage papers for this parsonage. The house was erected in 1947 when the church empowered the trustees to secure the necessary money for construction. In eight months the $3700 balance was paid off, thirteen years ahead of schedule.

In 1950 the down payment was made on an organ as a memorial gift, which was eventually replaced. In 1952 the pulpit furniture, which was used until the current building was completed in 2003, was given in memory of Richard E. Abbey who had been killed in Korea.

During the years of 1949-1950, a temporary Sunday school building was constructed beside the “Old Chapel.” It and the “Old Chapel” were torn down by 1970. On November 18, 1956, the ground was broken for a new building at the corner of Fourth and St. Joseph streets. Dedication services for this building were held on September 1, 1957. The total cost for construction, including land, was approximately $60,000, but that included the plumbing being donated by Carl Davis, the excavation donated by Allis Chalmers, and the church members laying the floor tile and the sidewalks and hanging the guttering. In 1967 the educational building was added to the existing facilities at the cost of $115,000.  Eventually, a parking lot was put in where the “Old Chapel” had stood.

Several pastors have served Southern View Chapel over the years: Horace Murfin, a missionary in Brazil, served while on furlough on more than one occasion; Virgil Smith, an evangelist from Florida, spent about a year here although no one seems to know exactly when (probably 1941); Jack Drake served in 1947, leaving to found the Navajo Mission in New Mexico; Earl Brown, a General Association of Regular Baptist Churches minister, pastored the church during 1948 and early 1949.

During the first eleven years of the history of Southern View Chapel, there was no stable pastoral ministry. That changed in September 1949 when a young pastor from Peoria by the name of Edward R. Hellyer came and stayed. He would be the pastor until his semi-retirement in 1980 when he became the visitation pastor. He eventually fully retired and continued to live in the church parsonage until 2006 when due to health reasons he moved to the Presbyterian Home. On October 1, 1975, Gary E. Gilley, also coming from the Peoria area, became the fourth assistant pastor in Southern View Chapel’s history and the first to stay over two years. On January 1, 1980, he became the present pastor.

In conjunction with Pastor Hellyer’s coming to SVC in September 1949, SVC has enjoyed the stable ministry of but two senior pastors for 64 years. Under Pastor Gary’s ministry, there have been a number of assistant pastors: Dennis Crady, Jim Hamilton, Randy Aldrich, Bobby Robinson, Bill Morgan, David Cunningham, Brian Gilley (who has now been on staff since 2003), and Richard Nix, Edwin Tevez and Mike Wickens.

Pastor Gary began a writing ministry in 1994 with the first publication of a paper called Think on These Things. This paper, plus other subsequent books and articles, has become an important part of the worldwide outreach of the Chapel.

In 2003 the church sold its existing properties in Southern View and built a new 25,000 square foot facility on 10 acres of land one mile south on Second Street. The cost of this facility plus furniture was approximately $2.4 million.  SVC continued to own the original parsonage until Pastor Hellyer could no longer occupy it. At that time we sold the parsonage and used the proceeds to purchase an additional five acres adjoining our present property. Pastor Hellyer died, several years after his wife, Alice, in 2008 at the age of 95.

In 2013 SVC completed an approximate 5000 square foot adult education wing at the cost of around $550,000. New ministries, such as the Springfield Center for Biblical Counseling have been added to numerous other ministries, old and new. More recently Civil Servant Ministries has come under the umbrella of SVC as we reach out with God’s truth to Illinois State House and Supreme Court. SVC’s truth extension is now an official arm of our church sending missionaries directly from our congregation. Church planting efforts are also being explored. SVC continues to thrive under the gracious hand of the Lord. It is indeed a reason for rejoicing to know that this congregation has remained faithful to the Word, is proclaiming the gospel, and is still striving to glorify God. No one of the original membership is alive today. In fact, no one who greeted the Hellyer family in 1949 is still in the church at this time. But we serve the same Lord, preach the same truth, and exalt the same Savior as our founders did. We have great reasons to rejoice in our Lord’s faithfulness. 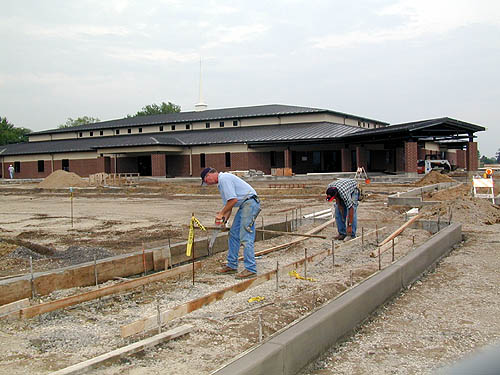 Giving
Calendar
Get Our App